Cultural and scientific exchange between Sweden and Italy

What do you think about if we say “Sweden”?

Few days ago we presented the last issue of The Passenger Sweden, the book-magazine published by Iperborea Casa Editrice, that collects long reads, investigative journalism, literary reportage and narrative essays.

Here’s a short summary of the many stories you will find in this book:

The Italian-Swedish director Erik Gandini is the author of the controversial documentary “The Swedish theory of love”. In this interview for The Passenger, he explains more about his social critique on the ideology of individual independence of Swedish society.

The Swedish writer Fredrik Sjöberg tells us about the island of Runmarö, a natural paradise in Stockholm’s archipelago, where he lives and studies insects reflecting on the changes in fauna, flora and landscape.

The commitment of the young activist Greta Thunberg is part of a long Swedish tradition according to which the opinions of children should be taken as seriously as those of adults, especially when they want to tell the world how to behave.

“Baby one more time” by Britney Spears, “Roar” by Katy Perry, “Shake it off” by Taylor Swift, “I don’t care” by Ed Sheeran, “Blinding lights” by The Weekend. What these songs have in common? They were all born in Sweden.

The book was published also thanks to a grant from the Lerici Foundation.

Are you an Italian or Swedish citizen and you are interested in carrying out a research project in Italy or Sweden?

Are you a Swedish or Italian publishing house and you are planning to publish a book related to Italy or Sweden?

You are in the right place!

Stay tuned for more updates on our social media and meanwhile check out our website!

Have you ever wanted to explore Sweden?

The Passenger is a project of the Italian publishing house Iperborea Casa Editrice, which specialises in Northern European literature. After over 30 years spent exploring the North, Iperborea opens to the rest of the world. The Passenger is a book-magazine that collects long reads, investigative journalism, literary reportage and narrative essays, with the aim of telling the story of the life of a country and its inhabitants.

In each issue you can find texts, infographics, original illustrations, recommendations from a famous author of a book, a film, an album, and photographs by international photographers documenting the most significant stories.

The last issue – published with the Lerici Foundation support – finally brings us to Sweden. Follow us for some sneak peaks into the book!

Johanna and My are two Swedish students in Architecture and Build Environment at Lund University. In these days they are carrying out a research titled “Behind the representational front of Rome” at the archives of MAXXI Museum in Rome.

Rome – the eternal city – has been featured as the city of representation: the capital of the Roman Empire, the catholic metropolis, the headquarter of the fascist regime, the navel of culture, and so on. The need to show Rome’s importance has been expressed through architecture. In fact representation requires proper mental, symbolic and physical facades in order to impress its visitors. Neverthless, each building presents four sides.

But what does it happen beyond the monumental facades? What impact do these spaces have on the city? Does a “backside” of the city really exist? Johanna and My will try to enlighten and compare the architectural backsides of Rome through sketches and old documents.

We decided to donate some Italian books translated into Swedish to various institutions and organizations in Sweden, such as hospitals and nursing homes, with the hope of giving a temporary relief from the difficult moment we are living in. After the donation to Huddinge Sjukhus few months ago, today we decided to give a selection of books to Löjtnantsgården vård-och omsorgsboende in Stockholm.

Due to the ongoing pandemic, many people are forced to stay home, sometimes alone and away from their friends or relatives. Reading could be a good way to escape from reality and travel wherever we want thanks to our imagination. We hope that Elena Ferrante, Roberto Saviano, Igiaba Scego, Antonio Tabucchi, and other Italian authors could keep company to many of you, wherever you are.

Zlatan Ibrahimović is best known by football fans around the world for his talent and rebellious character. He grew up in Rosengård, a difficult neighborhood in Malmö where immigrants from all over Europe meet. In this graphic novel, Paolo Castaldi chose to tell Zlatan’s youth, his first years of training, family conflicts and the first matches in the big football teams.Paolo Castaldi even spent a period in Rosengård to write and draw “Zlatan”. He visited the places frequented by the football player and he listened to the people who still live in the neighborhood. His graphic novel could in fact be considered halfway between biography and graphic journalism: it is both a reality comic and a reportage in search of the origins of Zlatan Ibrahimović.

Here you can also watch the book trailer: https://bit.ly/3e28B0

Will this comic be published in Sweden as well? Every year the C.M. Lerici Foundation offers grants to Swedish (and Italian) publishing houses. Interested? Check on our website!

Despite the ongoing pandemic, many Italian and Swedish students and researchers are starting to work on their projects abroad.

Today we are glad to present you Marco Baruzzo, student of Scandinavian Studies in the Language Sciences Master course at Università Ca’ Foscari Venezia.

He is doing a four weeks research for his master’s thesis project at Svenska barnboksinstitutet (The Swedish Institute’s for Children’s Books) in Stockholm.

Thanks to the knowledges gained with his bachelor’s thesis – the analysis of Inger Edelfeldt’s debut novel “Duktig pojke!” (1983) – his study will focus on the way all sexualities and sexual orientations are dealt with in children’s and youth literature. The idea is to read and do a comparative investigation on some recent children’s and youth book, mostly in Sweden but also in Danish and Norwegian.

What are the main trends within the recent “rainbow literature” for children and young people in Scandinavia, especially in Sweden? How are norm-critical sexualities presented to young readers? What kind of language and style do the writers use? Is there actually a boundary between children’s and adult literature?

We will ask these questions to Marco Baruzzo in the next days, so… Stay tuned! 😉 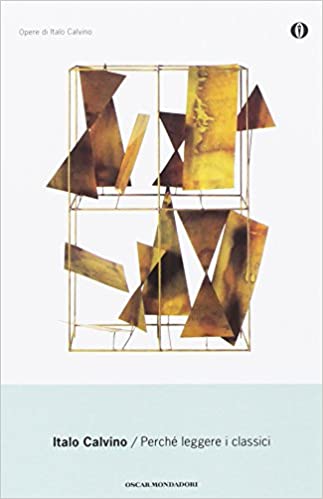 Why Read the Classics?

This is not only a good question, but also the title of a wonderful, stimulating book by the Italian author Italo Calvino.

Calvino defends the great literature’s value starting by defining which are the classics:

“The classics are those books about which you usually hear people saying: ‘I’m rereading…’, never ‘I’m reading…’”.

In 36 essays, he discusses the Western literature’s canon through the works of Homer, Defoe, Galileo, Stendhal, Dickens, Hemingway, and many others.

The book was also translated in Swedish as part of the series “Carta d’Italia”, that promotes the Italian literature in Sweden by publishing some of the 20th Century’s masterpieces.

Which is the best way to celebrate the birth anniversary of Elsa Morante?

Reading one of her books!

Elsa Morante was one of the most important voices of the Italian contemporary literature. In her books, she told the 20th century history of Italy. She is best known for her novel “L’isola di Arturo” (1957) (“Arturos ö”, Bonnier 1959), that won the Strega Prize. In 1974 Morante published “La storia” (“Historien”, Norstedt 1979), a book about the events surrounding Rome during World War II, that was listed in the Bokklubben World Library List of 100 Best Books of All Time.

Schools and universities are going to start again in Sweden, but what do you know about Swedish higher education?

Sweden is known as an innovative country, where great importance is given to higher education and research.

There are 14 public universities and 17 public university colleges in Sweden, besides independent higher education’s institutions, such as Stockholm School of Economics, Chalmers University of Technology in Gothenburg and Jönköping University.

The language is not a problem. In fact, Sweden is recognised as one of the top countries in the world for non-native speakers of English and students are able to use English both inside and outside the universities, in their academic courses as in their social life.

If you are working on a project that involves Sweden, you could spend a period in one of the Swedish universities or institutions to develop your research.

Every year C.M. Lerici Foundation offers scholarships to Swedish and Italian citizens in order to promote the cultural and scientific exchange.

The call 2021 is currently closed.